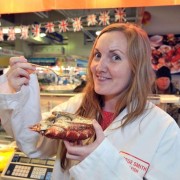 Hidden among Digbeth’s backstreets, the Karczma has gained a loyal following. Mary Griffin visits the Polish restaurant and finds a collection of curios and culinary delights.

Housed in a squat seventies brick building with white railings shielding the windows, The Karczma in Bordesley Street could easily go unnoticed.

But if you’re eagle-eyed enough to spot it and curious enough to venture inside you’ll find an invigorating mish-mash of trinkets, transporting the diner from inner-city Digbeth to a Polish hunting lodge on the slopes of the Tatra Mountains.

A straw ceiling hangs over heavy, wood furniture with thick, white sheepskin throws draped over the backs and seats of benches.

Dark wooden beams reach up walls (one adorned with scrawled signatures from the Polish band Zakopower’) and two wooden bird boxes look perfectly inconspicuous hanging from the wall and ceiling.

There’s a touch of taxidermy, with a stuffed hawk surveying diners from his perch above the bar and the skin of a gigantic wild boar hanging on the opposite wall.

Sitting on one of the gigantic, crudely constructed bar stools with sheepskin trim, you can imagine Conan the Barbarian hunched over the bar, animal leg in one hand, stein of beer in the other.

While I find the theatricality of the place utterly absorbing, I’m told by the Polish friends who brought me here that The Karczma (pronounced “Karrshjma”, with rolled Rs and meaning “The Inn”) looks like a bog standard eatery in the mountainous south, where Poland meets Slovakia.

We order a round of Polish beer which is delivered to the table with a pre-starter of bread, some giant gherkins and a pot containing fine chunks of pork in fat.

This appetizing and artery-clogging mix is more akin to rillettes than pate and spreads onto the bread (with something that looks a bit like a wallpaper scraper) like peanut butter. There are some tempting vegetarian options on the menu but, make no mistake, this is a carnivore’s restaurant.

Cutlery arrives in individual paper envelopes, which feels a bit like airline dining, and all food is served in heavy, stoneware crockery, personalised to bear the name of the restaurant. Chic.

With no Polish wine on offer we stick with Lech, an inoffensive lager, and share a starter of Placki Ziemniaczane z kwasna smietana lub sosem pieczarkowym (potato pancakes with sour cream of mushroom sauce) (£7.20).

A bit like a big hash brown, the potato cakes are too plain on their own but provide a good bed of stodge to complement the rich, salty, creamy sauce.

For mains I go for the dish with the best sounding name: Golonka (roast pork knuckle) (£14.20).

It’s a large plate of plain boiled potatoes and a big chunk of pig leg, still encased in a thick layer of rind and skin.

Armed only with a dinner knife and stacks of enthusiasm, I shed the knuckle’s coat, revealing hefty chunks of pink meat beneath.

For me, ham hock is a perfect cut for a spot of culinary alchemy. Three or four hours of slow cooking can see a patient cook turn this cheap-as-chips cut into a drool-inducing delicacy.

This hock hasn’t taken on the flavour of the beer it’s been roasted in and the meat isn’t melting from the bone as it does when it’s made that transformation to gourmet gold.

But the ham’s supporting cast is strong enough to save the show.

Pots of horseradish and mustard pack an almighty punch and, together with the plain boiled potatoes and the pickled cabbage, they cut through the fatty meat very satisfyingly.

Between butchering my pig leg I glance enviously at my companion’s Placek po Zbojnicku.

The menu describes this dish as “a real treat” and it’s not kidding.

It’s a melt-in-the-mouth slow cooked beef stew served on a giant potato pancake, fried and crisped around the edges, with an utterly irrelevant side salad.

Another tip of the hat has to go to the Zurek w chlebku, a hearty rye soup with smoked sausage, potato and boiled egg, served with a rustic wow factor in a hollowed out loaf of crusty bread.

The menu is extensive and I’m planning a return trip for the gherkin soup, the beetroot soup and the pierogi.

I’m told there can be only one dessert option if I want to experience the true Polish dining experience: the Szarlotka z lodami i bita smietana (traditional apple cake with freshly whipped cream and ice cream) (£5.50).

Imagine the fruit mix of an apple crumble sitting on top of a square of vanilla sponge and topped with cream. It has the feel of a trifle without the jelly.

A scoop of vanilla ice cream beside it has been given a drizzle of Apple Sourz or something similar. This is definitely a retro pud.

Strangely, the cream behaves like the squirty stuff, quickly deflating over the apples, while the sponge base tastes curiously like packet mix.

My Polish pals are utterly indignant at my reluctance.

This is, by all accounts, the real deal, and as odd as it is to my palate I don’t mind admitting it works.

They suggest vodka to finish the meal, saying that traditional Polish weddings serve a shot of vodka with pickled cucumber to take away the taste (like the lemon wedge after a tequila slammer).

The waiter chooses his favourite tipple, delivering a small glass of Zoladkowa, served neat. It’s 38 per cent and its name means “bitter vodka for the stomach”.

Golden in colour with a sweet, slightly floral taste that slips down like honey, it’s a real revelation and makes a great alternative to a dessert wine.

This place is excellent value and the bill for four comes to just over £100, beers and vodkas included.

The Karczma has soul and there’s a satisfaction to eating here that you just don’t get from a more mainstream eatery.

Take a chance on something a little different and you’ll be dazzled by this Polish Aladdin’s cave and its wholesome, hearty fodder.

Anna Rose – Review “DineBirmingham”
We use cookies to ensure that we give you the best experience on our website. If you continue to use this site we will assume that you are happy with it.Ok
Scroll to top