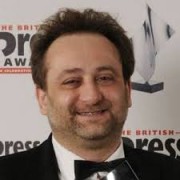 After many years practising this uniquely stressful journalistic art form, I flatter myself that my antennae are sufficiently finely tuned to pick up long-range clues about a restaurant from the tone of the person taking bookings for it. Or at least I did until an encounter with The Karczma’s automated phone booking system, thanks to which – for the first time ever – I booked a table without speaking to a human being. This robotic voice offered no hint whatsoever of the actual restaurant’s magnificent oddity (for which, in fairness, nothing short of a flirtation with hallucinogens could prepare you).

I have written before about my love of „wormhole restaurants” – that elite band of establishments which are so spectacularly divorced from their environs that you suspect you must have slipped through a tear in the space-time continuum into a parallel universe. Onto this most distinguished honours board, let the name of The Karczma herewith be stencilled.

Cunningly concealed just off the Birmingham ring road, behind a frontage so anonymous that it took us three attempts to find it, is a teeny-tiny room that strikes the eye as less a restaurant than an illustration from a book of fairy tales. The ceiling is thatched; straw also more haphazardly garnishes a display of samovars and sunflowers. The walls are of a Battenbergish pink, decorated with naïf murals of bucolic Polish life; perched above the bar is a stuffed hawk staring, either furiously or hungrily (who am I, the Desmond Morris of ornithology?), at a brown bear skin stretched out on the opposite wall. Ranged along said bar are fleece-draped stools with thick, crooked wooden legs of the sort you imagine Hansel and Gretel sitting upon as they munched on their gingerbread.

Picking the champion peculiarity from so many is a mug’s game, but I must mention the glass jar on the table, which contained the sort of miniature garden scene (a cartoonish bird, made from felt and speared by a long stick, resting on plastic leaves) which a five year-old might make as a displacement activity while waiting to be eaten in a forest.

When the menu arrived it took the form of large, heavy, wooden pages, such that it resembled a medieval book of malevolent spells. The only thing required to complete the scene was a bed in the corner occupied by a wolf in a shawl.

Mary Griffin – Recenzja „Birmingham Post”
We use cookies to ensure that we give you the best experience on our website. If you continue to use this site we will assume that you are happy with it.Ok
Scroll to top